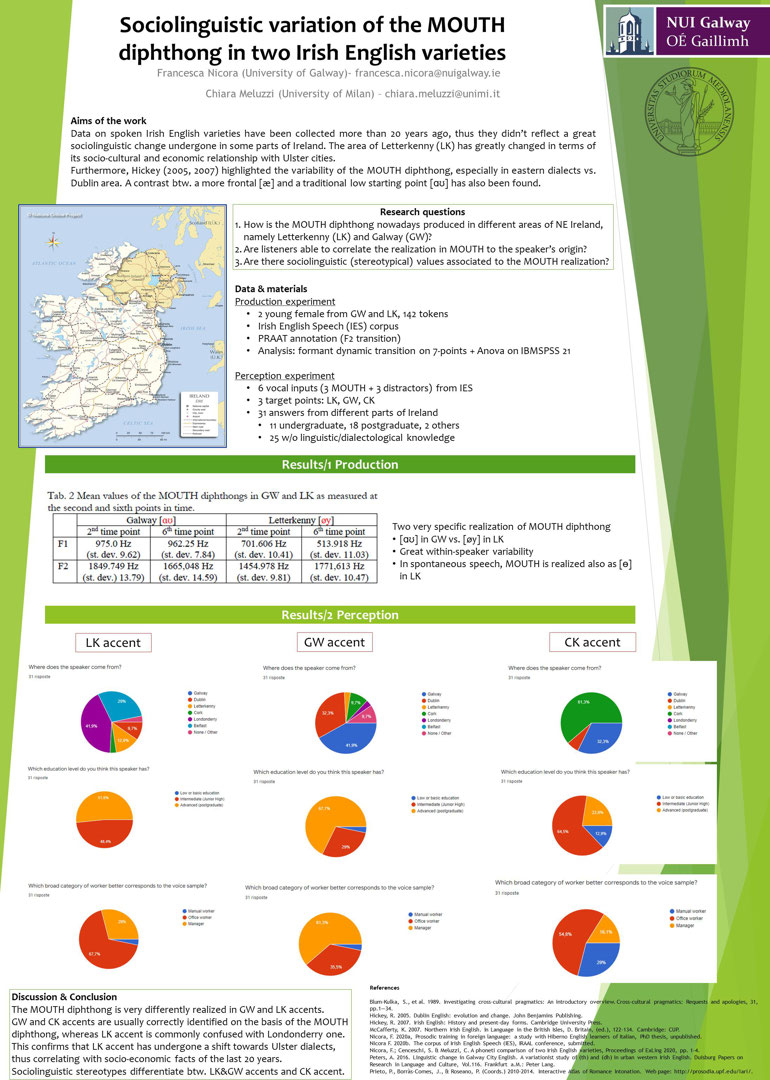 This research offers a preliminary survey on vowel variation between two Irish English varieties: Galway (GW) and Letterkenny (LK). Despite the great amount of literature on English dialects, a phonetic investigation on these varieties is essentially based on data collected 20 (or more) years ago. In the meantime, the sociolinguistic situation of LK has greatly change, in particular with respect to the relationship btw. this town and other Ulster cities of the area. Therefore, new data could be compared with the literature, but also open the path to further in-depth sociophonetic investigations on both production and perception of Irish English varieties.
Our hypothesis is that a difference btw. GW and LK spoken varieties is present, but that GW variety was more prone to supra-regional southern Irish English, in particular for what it concerns the MOUTH diphthong. We also make the hypothesis that different sociolinguistic values are associated to the different realizations; due to the lack of previous literature, we aim at investigating which stereotypes are associated to peculiar LK realization of the MOUTH diphthong.
Two adult female subjects born and living in GW and in LK, respectively, aged btw. 20-30, were recorded in a soundproof room. Data was based on the discourse completion task (DCT) of 59 stimuli, each one including a real communication context and a target utterance. Subjects were asked to produce spontaneous utterances suited to the pragmatic function of a given context, and then to read a target utterance proposed by the researcher for the same research. We selected three words containing the MOUTH diphthong. We perform a semi-automatic analysis on F1 and F2 values at 7 target points to identify the different variants.
Based on the results of this first experiment, we prepared a perceptive task submitted through Google Modules to 60 participants equally distributed between Gallway, Letterkenny and Londonderry, the first town in Ulster in contact with the LK variety. Participants were asked to listen to the audio and to answer a multiple choice questionnaires aiming at tracing a sociolinguistic profile of the speaker; finally, respondents have to guess speakers’ origin through an open question.
While results of the perceptive experiment are still under analysis, the results on the productions of the subjects have highlighted how the MOUTH diphthong was realized as [/ɑʊ/] in GW and as [øY] (but with great variation) in LK. Furthermore in LK, the diphthong was often reduced to a centralized monophthong like [ɵ]. This phenomenon could possibly be linked to the phonological position of the word into the sentence, but the corpus does not allow, at the present state of the research, a quantitative investigation in this sense.
The results of this preliminary survey showed only the presence of a difference between GW and LK for the MOUTH diphthong. These results update the literature on the Irish varieties, in particular the Northern ones. The upcoming results of the perceptive experiment will broad our knowledge on sociophonetic values and the possibly stereotypes associated to the different varieties.

See also: PDF of the poster